Located in the commune of Foum el Oued, along the Atlantic coast, ASARI (African Institute for Research on Sustainable Agriculture) is a national priority project, carried by the OCP Group through the Phosboucraâ Foundation, whose objective is to contribute to the economic and social development of a promising region, by setting up a center dedicated to research and innovation. A reference project for Morocco and in particular for the southern regions, ASARI wants to convey a constructive message for the inhabitants of this magnificent territory, positioning itself as an opportunity for change. The project is composed of various complementary programmatic elements, dedicated to research, including several workspaces, laboratories and teaching premises. To respond to this ambitious project, we have formed a consortium of companies with complementary skills and know-how in the fields of engineering, design and innovation, construction and the operation of remarkable projects. with a sustainable purpose. Designed as a landscape landmark, this project responds to three major topics: The opportunity to promote a positive and profound transformation of our societies by paying for new forms of organization and value creation. An opportunity to question established models and reinvent our ways of life, work and exchanges. Conceive architecture as a necessary quality for the creation of an identity place thanks to a site which is located at the landscape confluence between the desert and the ocean. An architecture as a place of life but also as a link between the ocean and the desert, both always present and in perpetual motion.

Imagine a building based on the potential and assets of the site located on the banks of Foum El Oued. We use the climate, the winds, the sand, and the know-how of the sub-Saharan coast, to achieve the best sustainable performance. In perfect harmony with the climate, our architectural approach is based on the potential offered by the site and aims to integrate and compose with the natural terrain by optimizing the dialogue between the building and its environment. The project was designed by going well beyond the creation of a simple building. Designed as a landscape landmark, the African Institute for Research on Sustainable Agriculture in Laayoune relies on the various environmental constraints, such as an ecosystem capable of creating a new place of life and exchange in the middle of the desert. The system has been designed in relation to the prevailing wind, which comes from the North-North-East, to create protections which also serve to define a circulation and connection space between the different buildings and make it possible to create a visual relationship. between the desert and the sea. This space becomes the backbone of the campus, connecting the research units which are articulated along a covered walkway thanks to a canopy of steel cables and Sahrawi-coloured sunshade canvas, thus offering solar control. living space outside the buildings and a functional architectural style rooted in local roots. This space therefore becomes a new place that connects and harmonizes with the desert and the sea in a space protected from the wind and sand. The exterior facades have been designed with the same element that is repeated with a frequency that corresponds to the protection of the lit parts of the buildings from solar radiation, while allowing a simple and functional architectural style. Simple and sober, the architecture that we propose for the project draws clear lines to leave an important place to nature which comes to innervate it, while creating spaces of meeting and exchanges.

Each building has a central interior patio that provides natural ventilation for all the common areas of the campus as well as the open-space workspaces. The interior patios play a very important role in the environmental and passive design of the project while making it possible to restore the buildings to a human scale of calm and concentration. The development of outdoor spaces presents an opportunity for research and awareness of plantations in dry environments. Outdoor spaces are largely composed of wind protection structures. The soil is made up of different grain sizes, the rocks in place are ordered and raked. The beauty of the project is revealed through the exaltation of the minerality of the site. Built between the different lines of force of the landscape, these ripraps come to serve as protection and places. Traces in the landscape are then created, reinforcing the identity of the site. The architecture of the ASARI institute in Foum El Oued wishes to demonstrate that the ecology-technology relationship is as important as it is delicate and that it will have to be balanced. A technology at the service of ecology and a sustainable, passive architectural design, which aims to adapt to the place, to its environment with the ultimate goal of protecting a nature teeming with resources and knowledge. 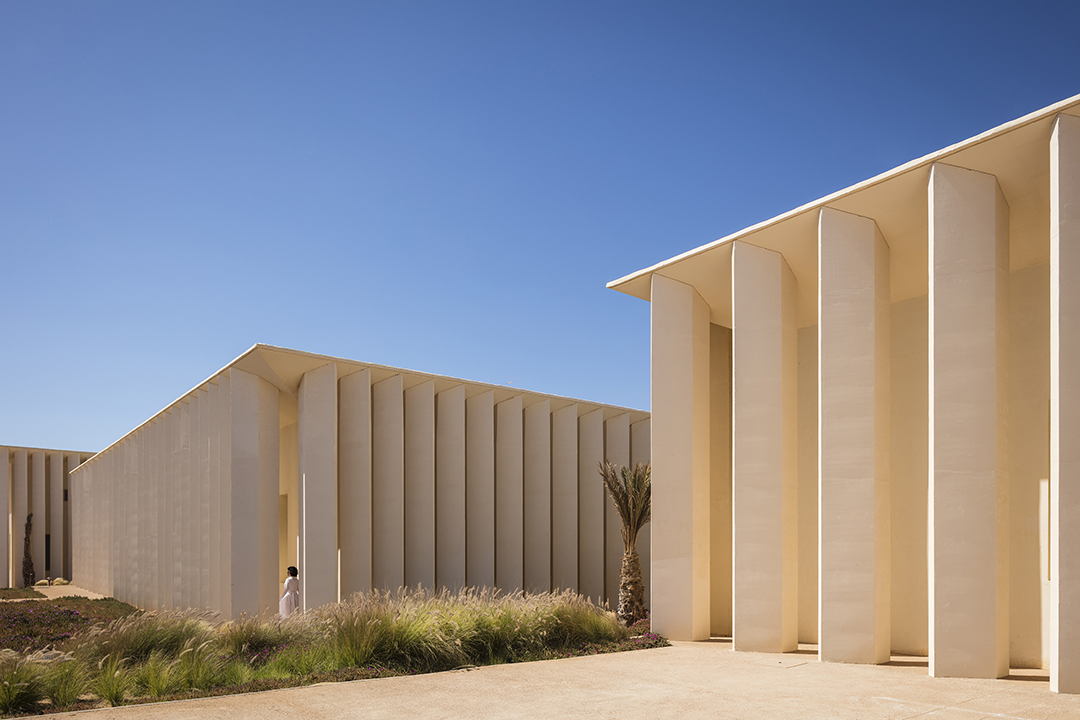 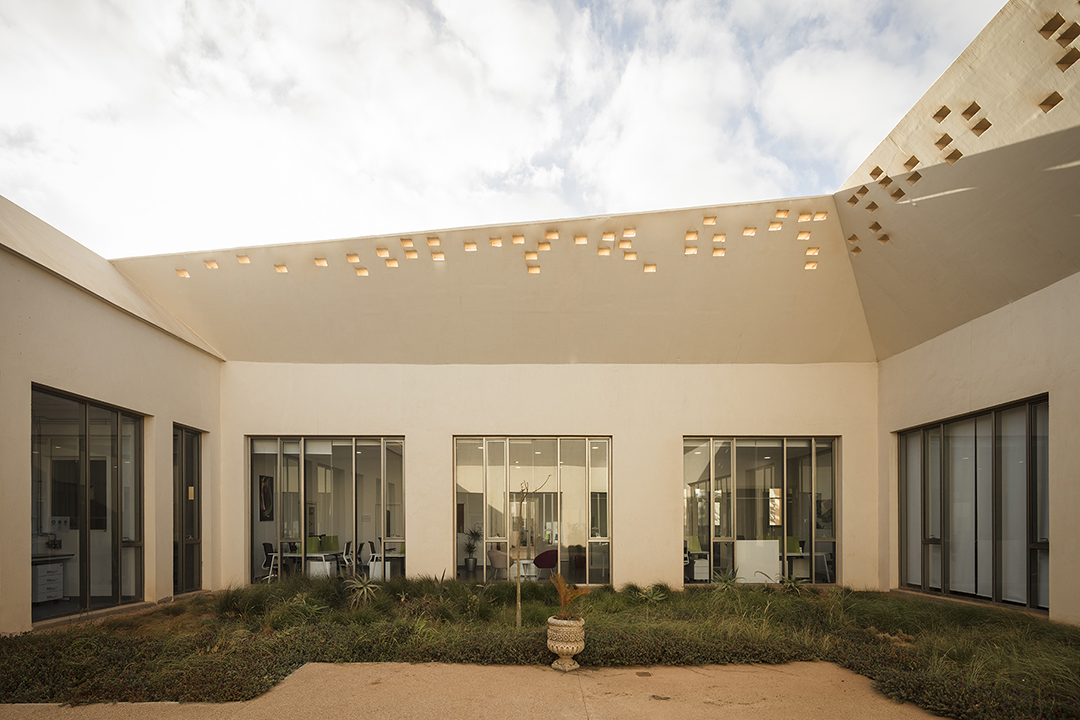 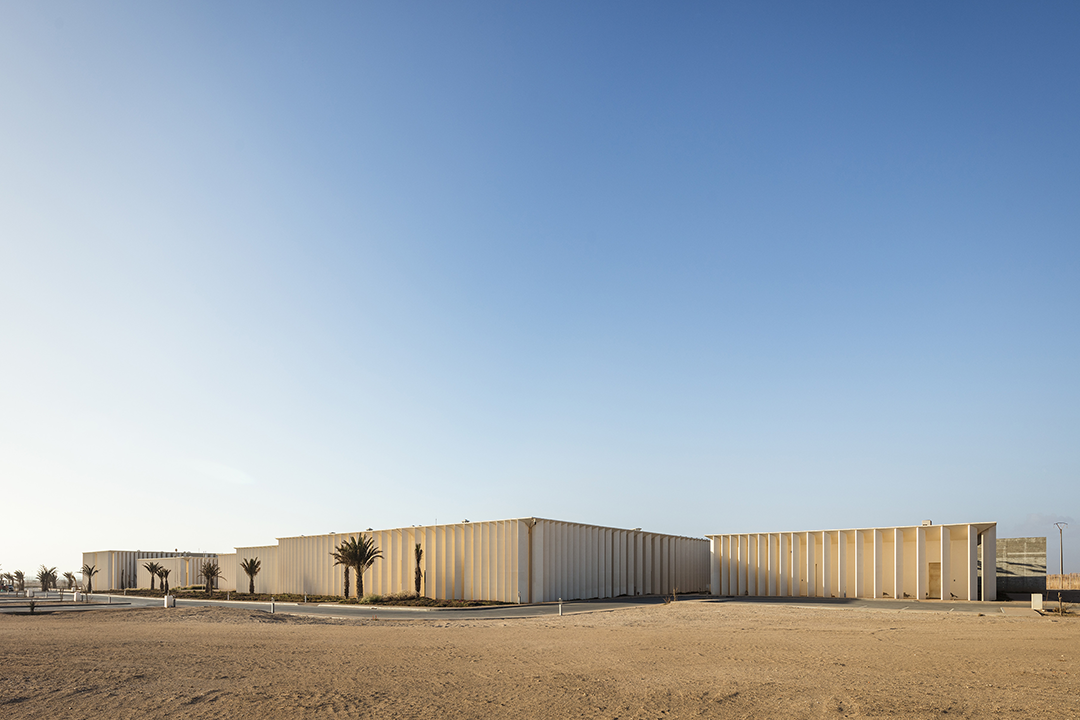 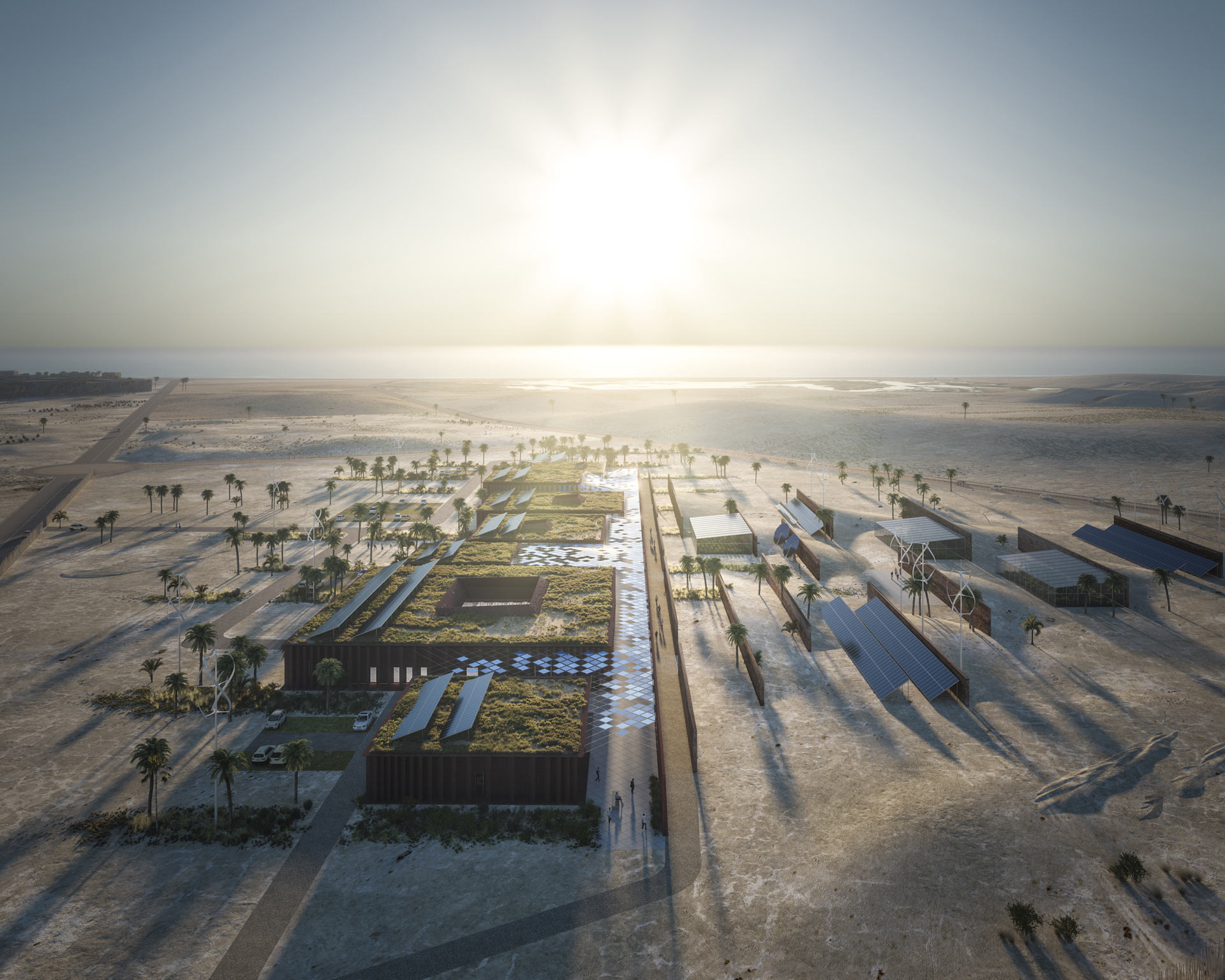 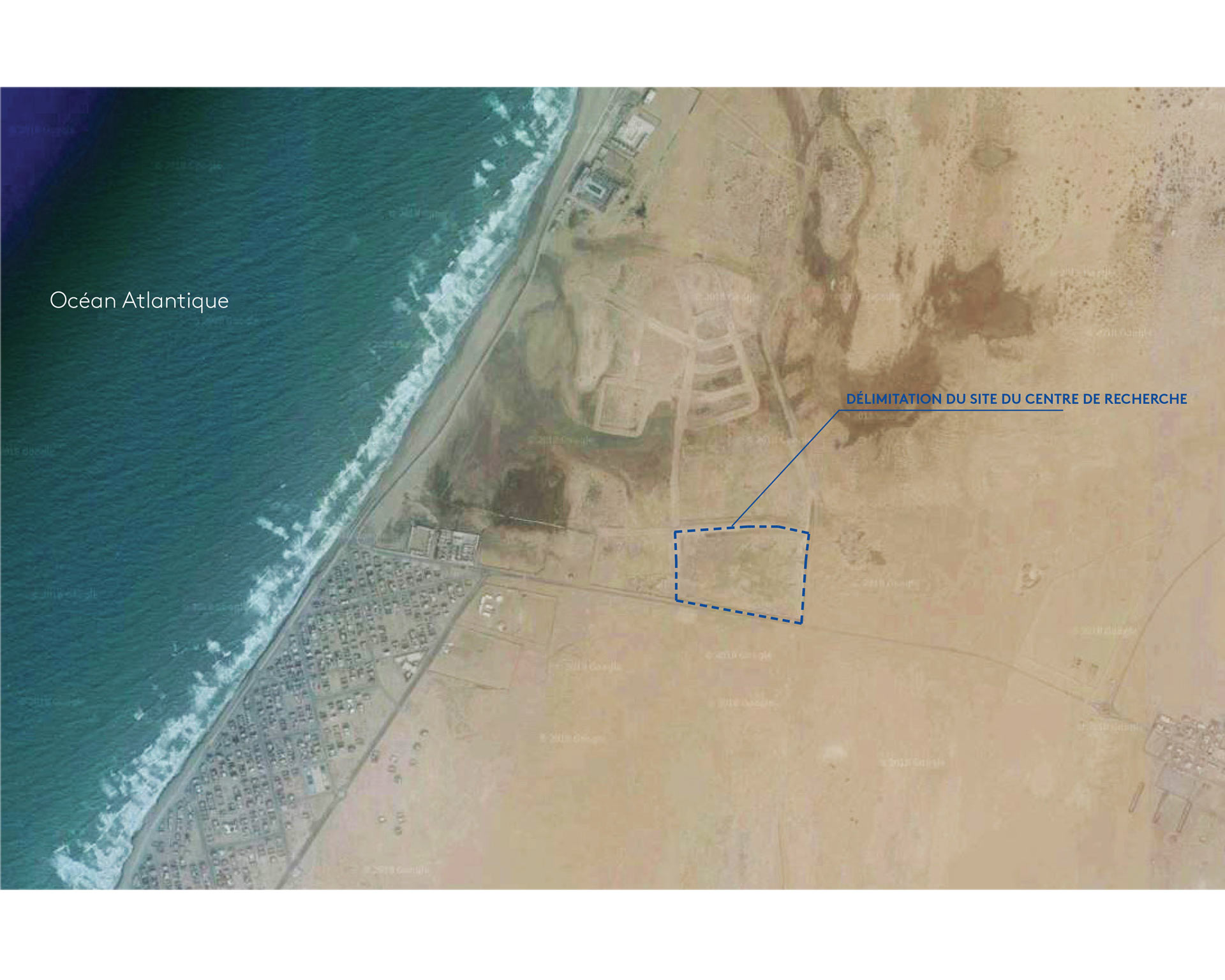 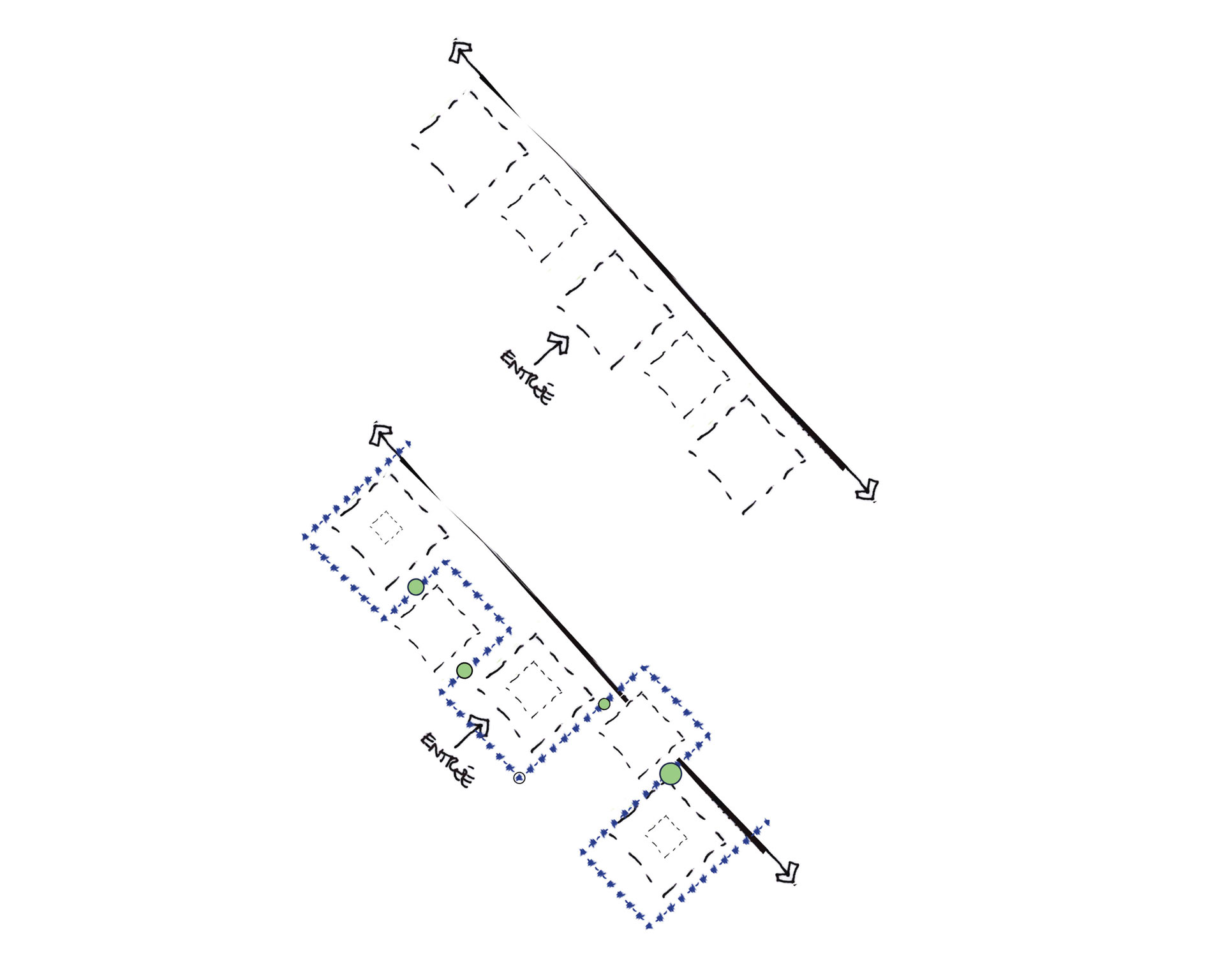 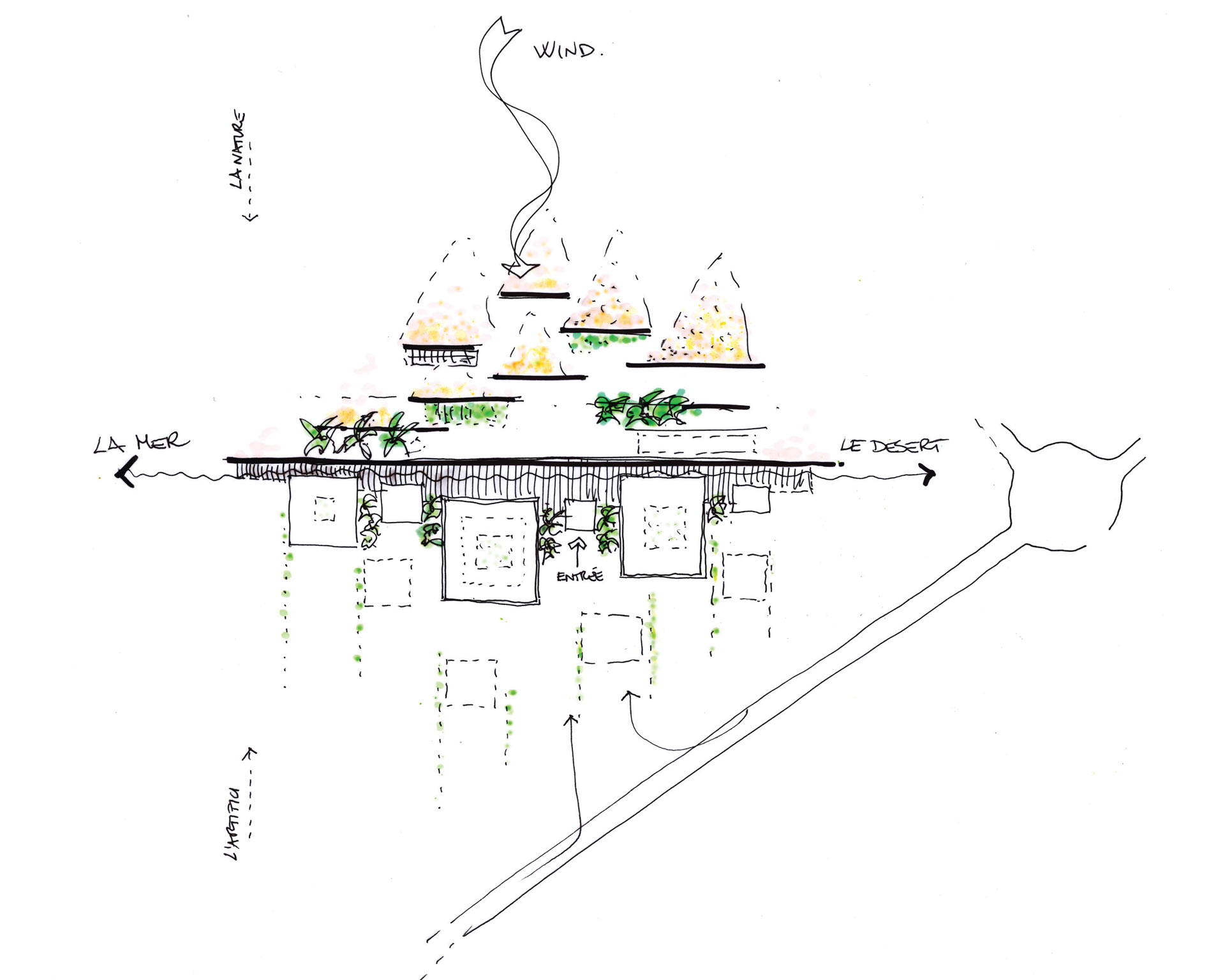